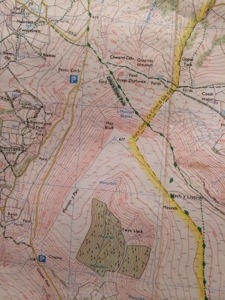 It’s been ages since we have been out on the hills of Wales. Probably over a year. All change now though. This coming weekend with the help of one of Bobs boys looking after the house and a Groupon stay in a hotel in Hay on Wye we should be able to crack a few peaks. Hay Bluff for one and then Lord Herefords Knob (just had to use that) and on to Waun Fach I hope. The forecast is cold and showery.

Maybe Sunday it will be a geocaching session in the Mynydd Du Forest. This will always be a special place for Bob. He did a huge fundraising event in the 90s with a group of colleagues and raised a nice little sum for a special girl called Sally. It was a great weekend, a real boys only weekend helped by one of his best mates BJ. Bernie Jennings. Sadly no longer with us. BJ taught Bob and so many others a huge amount about the great outdoors and life. It’s almost certainly BJs influence that caused Bob to end up working for the Prince’s Trust. Thanks BJ. You are a star and will be missed always.