We are now in the early planning stages of our big trip….
The Pan American Highway.

This is part of the route we are working on at the moment….  It will change over the next few months I am sure.  If you have any ‘go to places’ please let us know.

Obviously 2020 put some of our van settling in trips on hold.  However we have managed to get away a bit and will be updating the blog soon.

Some of the trip we are planning may not give us access to potable water so we had to look at filtration. Tuck Trucks did a great video about what they use which confirmed we were going down the right track.

Basically we will have a 5 micron filter between the water source and our on board take.  This will keep most of the ‘rubbish’ out from our system.  However we still need to make sure the water is clean enough to drink.  Opting out of bottled water for obvious reasons, and following quite a bit of research on the internet I contacted John at Direct Water Filters.

John suggested we went for this system between the pump and the taps.

This means all the water will be filtered meaning we will have to replace the filter more often however, we do not have the space for a separate tap in the kitchen.

The MLT560 does have a bit of an over hang to be honest…  With this in mind we decided to get VB rear air suspension fitted by Rhino Installs in Preston.  This will allow us to lift the rear when needed.  We went for the Comfort option which allows us to change the height from inside the motorhome with a built in compressor that is now fitted under the driver’s seat

The fit, which took about 3 hours, is very tidy with the gauges and switches fitting into the single DIN space we had below the radio.  Initial tests show we get an extra 10 cm lift at the very rear. 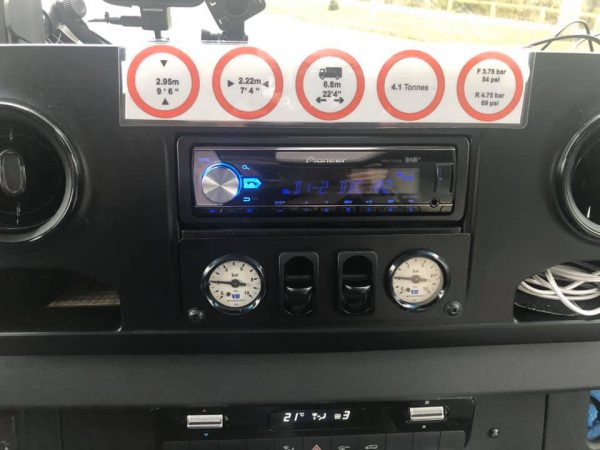 Well it has finally happened…  We have the van

Yep we collected the 560 from Becks last weekend and love it.  First night was in a small campsite near Tring…  just 20 minutes from home!
Then off to Taunton for a long weekend fitting alarms etc.

Loving the 240 watt solar panels along with 3 x 95 amp hour leisure batteries.  Also with the inverter that we chose, it switches on automatically if we are not plugged in to mains.  So all the 240 volt sockets can be fed.  Real bonus, not that we have many 240v appliances but it does mean we won’t need to run extension leads all over the van.  The SOG outlet feeds out to the roof, so its very neat.

A week or so earlier than expected we received the call from Mark at Becks saying our van was in the UK and in their yard!

We popped up to check it over before a few extra toys were fitted…  It was a dream to see it after waiting since January.
The extra kit we are having fitted includes, external WiFi antenna (from Motorhome Wifi)  along with 240 watts of solar panels to go with the three 95 amp hour batteries and 1800 watt inverter that were factory fitted.

We will be collecting it in August.

Today we had a call from Becks Motorhome saying our van had been built!

Should be in the UK within the next 2 weeks. It seems ages since we’ve been on the road.

A day of mixed emotions.  Our Hymer Starline 640 has been sold and collected by the new owners.  So for the first time since we have been together we are Hymerless.  Hopefully not for long as the MLT 560 is due in July.  Albeit we are having some extra work carried out on it once it arrives in the UK so may not be on the road until August.

Well we have set a date!  March 2021 will be when we move out of our house and into the van.

Our Hymer Starline 640 is up for sale and, after looking about, we have ordered a Hymer MLT 560 from Becks Motorhomes in Norfolk.  They are quite a distance from us but having met them at the NEC we liked their approach and have since hear some great reviews about them.

The 560 is a 2/3 birth and has a fantastic payload which is something we will need for the Pan Am Highway.

All we have to do now is wait until July.  Meanwhile we are starting the big clear out of the house…..