On the road to Imichil we found our next overnight site – a layby adjacent to Fatima’s Farm.  This was not a formal campsite rather a spot of land next door to a farm owned by a lady called Fatima and so a second night of wild camping.

On pulling into the layby we were immediately surrounded by the children from the 4/5 houses that make up the farm; everywhere you go in Morocco, whether it’s roadside or on a campsite,the children ask for pens, paper, sweets and even clothes. They are persistent but not nasty when you keep saying no and they usually wave you away with a big smile on their faces. Life on the farm is basic, subsistence farming; they grow grow crops and raise sheep, goats and cows. What is not needed is taken to market and sold to buy what they can’t provide themselves. Electricity is in the form of single bulbs in some rooms and that comes from solar panels. But despite the hardship, Fatima and her extended family were very welcoming and hospitable – we were all invited in for tea and homemade bread, butter and olive oil on arrival.

We had very generously been given bags of childrens’ clothes by a good friend (and dance teacher – thanks Chantal!) and left a few of them here where they were very much appreciated.

After dinner around the campfire and music played by the children we went back into the house to find Fatima making butter – hours of swinging a large container of milk. This woman is in her 60s and in the short time we were there she had gathered feed from the mountainside for the cattle, joined us for tea and made butter for the following day. They didn’t eat dinner until after we left (around 10pm) and she was up again at 5am to bake bread for us to take away with us. 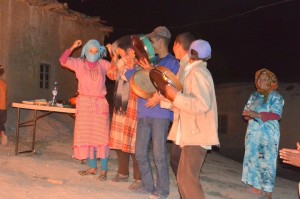 Yes through these trips she is obviously better off than many farmers here but still it’s a life none of us would opt for – our major problems were working out how to cope without electricity or topping up water for three days. Puts a lot of things into perspective……