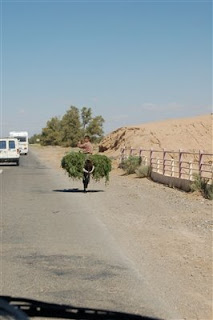 We left the Sahara and travelled along one of the main routes to the south of the Atlas mountains, our destination being Camping Le Soleil, somewhere between Tinerhir and the Todra Gorge. The campsite was by far the best we had stayed in so far – they even had a washing machine(!), and the girls made the most of a swimming pool on site. We were given the option of an extra day here or moving on to a more basic site in Ourzazate and because a couple of us were suffering with dodgy stomachs we decided to stay. The extra day gave us a chance to relax – you can’t describe this trip as a real holiday, and recharge the batteries before Marrakech.

The old and the new – we find ourselves sharing the road with donkeys, horse and carts and all forms of transport. But wherever we have gone we have been given a smile and a wave.
The campsite. A beautiful place to stay surrounded by soaring red sandstone walls. The extra bonuses being an electricity supply that didn’t fail and our own water supply! 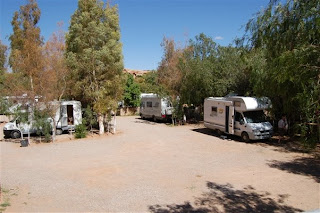 The girls enjoying some downtime. They have been so good on the trip going wherever we’ve dragged them and the extra day 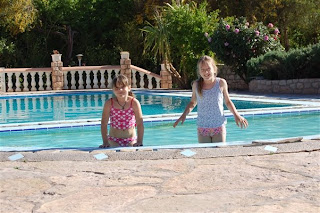 here gave them some time to do what they enjoy.

be found feeding them. Chloe also had another astronomy lesson that night – we’re waiting for the request for a telescope!

Before moving on we went to Todra Gorge. We could go on about the geology of the area but won’t (we’ll put up a 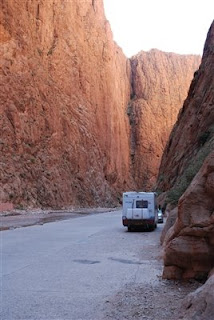 separate website when we get back for those interested as the whole trip has been a geologist’s dream) – all we will say is that it is stunning. The gorge narrows to around 20m with walls of 300m. With our other hobby being geocaching, we moved further along the Gorge and after Bob had scrambled halfway up the side of the gorge, we claimed out “first to find” with a cache that had recently been placed there. There are some great places to stay in the area.

One thought on “Todra”