A little behind in getting this trip up.  Took advantage of the C-19 Lock-down to get up to date

The mission to see the Northern Lights continues and we find ourselves back in Iceland for a long weekend with our good friends Sarah and Colin.  Having covered the Reykjavik area and the south coast during our last trip, this time we were heading north of the capital to a lodge on a hillside not too far from the town of Borganes.

The recent weather had been quite stormy (and that’s stormy by Icelandic standards!) with the airport being closed at one point but we arrived safely.  First stop was for the essential supplies:

Having picked up the rental car, a 4 x 4 was essential, it was a relatively calm drive from the airport to Borganes for lunch and a trip to the supermarket to stock up on food.  Iceland is very expensive so the plan was to eat at home as much as possible and keep the eating out to lunchtime only.

Although the weather was calm, there had been recent snowfall and arriving at the property we couldn’t get right to the top of the driveway to unload the car!

We’d picked a remote house this time to stay away from the city lights in the hope of getting the best view should the Lights come out to play.  The house had stunning views across the Borgarfjörður and we’d get to see them, or not as the case may be, in all weather conditions. The hot tub was also on the to do list.

An early start the following morning to get to Þingvellir National Park so as we could go snorkelling, yes snorkelling, in the water of the Silfra fissure, one of the cracks in the rift valley between the European and American tectonic plates.  This was one of Bob’s bucket list items and with a big birthday coming up, it seemed a good time to do this. The weather was closing in again with another storm on its way and when we arrived we were told that all tours were being moved up to the morning so people could get out of the park before the storm hit.  Didn’t sound good!

We were told to wear full thermals and thick socks which we did and were provided with a dry suit, gloves, mask, snorkel and fins.  The water temperature was 2ºC but because they were trying to squeeze everyone into the morning session, we had to wait for a couple of hours before getting in the water and that was bloody freezing!  Getting into the water was an actual relief and the only area of skin exposed, the face, soon goes numb.

The experience was amazing and we would highly recommend it.  The water is so clear

After a quick lunch in Reykjavik we hightailed it back to the house to sit out the storm – we had intended to go snowmobiling on a glacier the following day but that had been cancelled.  With nothing much else to do that day it seemed a good thing to drink red wine and watch out of the window.

The weather had cleared the following morning so it was in the car and off to explore a bit more of the Snæfellsnes Peninsula on the west coast.  We stopped at an amazing cafe near Arnarstapi for a warming homemade meat soup and coffee. It was like sitting in someone’s front room from years gone by.

We also walked along some of the wild coastline between Stepi and Hellnar.

From there it was on to Vatnshellir where there is a 8,000 year old lava tube which lies underground.  You can only go underground with a guide and whilst this wouldn’t be the only reason to visit the area, if you’re in the area it’s something different to do.

We continued driving round the perimeter of the peninsula passing Kirkjufell which would be well known to fans of Game of Thrones (not us!).

Tonight was hot tub night.  Bob braved the cold (something like -8ºC with the windchill!) to fill the tub.  Hot water is in plentiful supply throughout Iceland as it comes from geothermal sources in the ground.  All that was needed after that was to open the Prosecco. Cheers!

For our last full day we went north towards Hvitserkur, a sea stack which according to legend was a troll caught by the sunrise while attempting to destroy the monastery at Þingeyrar.  Great fun getting down to the beach as well!

Driving back we had a little problem with one of the roads being closed by a landslide so Bob had to reverse back to be able to turn around.  Doesn’t sound so bad but then I should add that the road had an 18% slope, was mountainside and just one vehicle wide…. A few nervous moments but it takes a lot to faze Bob!

We had to return to the airport late the following afternoon so on the way back we headed to the mighty Gullfoss which even when partially frozen is still a breathtaking sight. 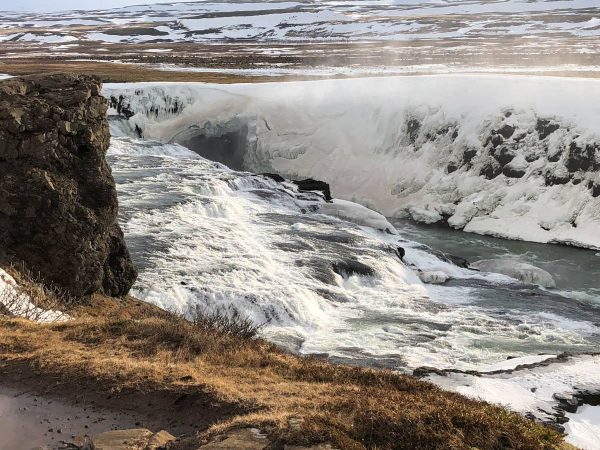 Another amazing trip to this fascinating country and we still want to come back again but probably the next trip will be a summer one and maybe a Route 1 road trip around the island.  As for the Northern Lights….well they continued to evade us, or did they? When we got home we found this on one of the cameras:

Not seen by the naked eye but definitely there!  But we now have the perfect excuse for next year’s trip.  Norway or Finland here we come.