We are now in Morocco….. The crossing was something else..It appeared total chaos…. But there was a system.. I think!

1 hour later and we managed to clear all the check points. Ray earned his fee for that part alone.

The first night we spent at Martil. Not a Caravan Club site but we were warned not to expect UK standards ( having said that I have spent nights at worse sites in the UK);

We went off to the town to change our money and then to the beach where Chloe and Amy had a swim… albeit the water was not very warm… Having collected several kilo of shells we returned to the Motorhome and ate at the site restaurant. 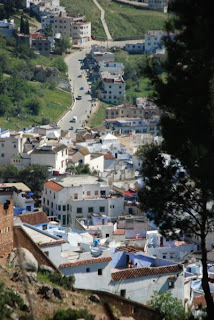 Today, Thursday, we had a 9.00 start and then via a supermarket we drove to the camp site at Chefchaouen. The route was through some of the Rif Mountains… it was much greener than we thought it would be. Very beautiful. We also came across our first Moroccan driving….. !

We had a short brief with Ray ( the tour leader for those unaware) and then walked down to the village…; with blue building… Very pretty.

We wandered through the narrow streets and stalls. Felt totally safe..; Not too sure what we expected though…

Stopped in the main square for a Mint Tea. Never had a real one before and will be having many many more I am sure.

Visited the Kasbah which gave a good view of the town square.

Grand taxi back to the site for just 30 Dirham ( two pound fifty or there abouts) ….well it was a steep hill back! And with a sane driver. 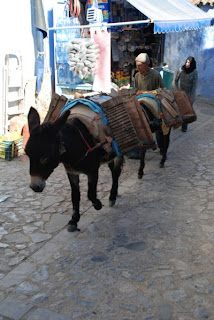 We have all had great fun and Chloe and Amy are having a great time. 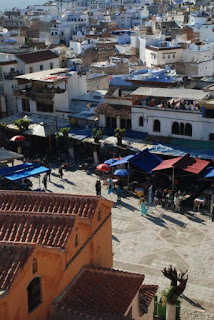 Hope to put up some photos soon but not tomorrow as we are wild camping at Volubilis near to the Roman ruins.