Unfortunately the internet access was not all that we expected, be so the blog is being finished from the comfort of home. After four weeks in the van our little 2-bed cottage seems like a mansion and the joy of having a washing machine and hot water without having to queue for it cannot be put into words! For those interested, we’ll post another update with a link to the photos – we promise we haven’t uploaded the 3000 or so that we took, and our thoughts or what we could have done to make the trip easier. So onwards from Todra which now seems such a long time ago….

All fully recovered, we left Todra and made our way to Ouarzazate along the road which was surrounded by ancient kasbahs and then through the Vallee des Roses, stopping to buy local rose based creams and lotions. This was a brief stop for us before heading back over the Atlas Mountains. We caught up with the rest of the group for dinner that night (our first restaurant that was licensed!) and Chloe joined in the dancing again.

Our next stop was Marrakech but before that we had to pass through the Atlas Mountains again – this time via the Tizi n’ Tichka pass (or chicken tikka pass as it became known!). We weren’t travelling in convoy this time as the road was narrow and 14 vans would cause quite a hold-up – the Moroccans are not the most patient drivers and we saw some REALLY hairy driving on the trip. 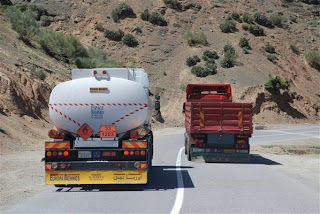 The journey out of Ouarzazate passes across large plains before heading into the foothills
where we stopped for a coffee and some rock collecting – we even managed to get
one of the other couples into examining what was lying on the floor! From there it was up
into the mountains to a height of 2260m and then back down via the pass. 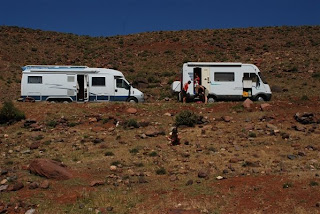 The drive was spectacular along a narrow winding road through numerous hairpin bends. Asides from the scenery the most memorable part of this trip was lorries coming in the opposite direction with cows and sheep perched on the top above, what to us would be, the usual size load. 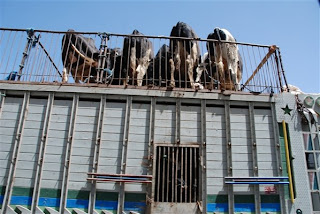 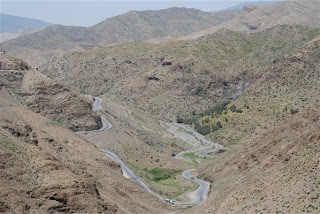 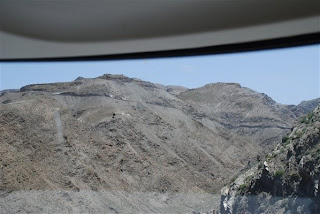 Oh, and along this road was another cache and as we had only picked up one on this trip we stopped to find this one as well. It was a case of pulling into a small layby and hoping that nothing too big came around the bend! 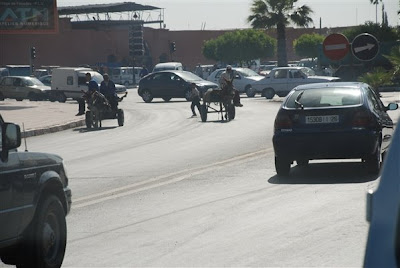 And then Marrakech – a total contrast to anything we had seen already and words probably cannot do it justice. The campsite was some 10km from the city centre which was probably a blessing at we were able to escape for some peace and quiet! 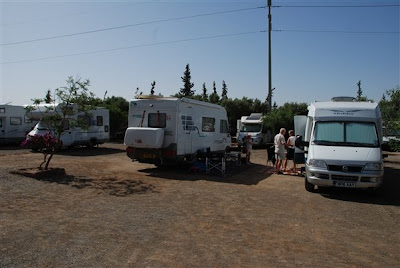 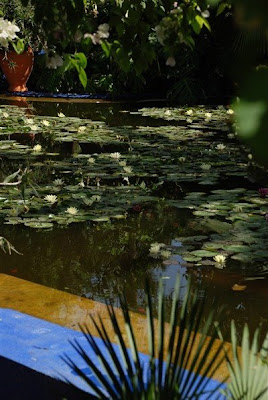 ecently owned and renovated by Yves Saint Laurent before he died), the Bahia Palace and the Saadian Tombs. During the tour we also had a brief introduction to the souks and the main square Djemaa El Fna.

The guide obviously had a deal with one of the local herb shops and we were ushered in for a talk and massage – very reasonable at under £2 for neck and shoulders, before coming out laden down with various creams and oils! After a brief supermarket visit it was back into the city to experience the square at night.

Throughout the day and night the square is home to entertainers – snake charmers, story tellers, musicians, and the atmosphere is electric. We had freshly squeezed juice from one of the stalls before taking a walk around the food section. Here people come at you from all directions to encourage you to sit at their stall and the choice of food was something else – tanks full of snails and even the choice of sizes of sheep heads! The smell however was wonderful but after a huge lunch we weren’t hungry so we just grabbed an ice cream before heading back to the camp. 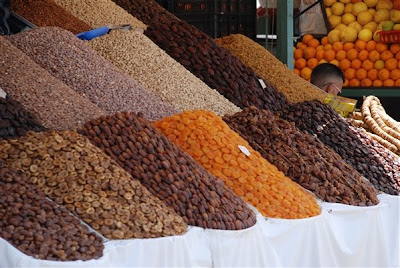 The next day we were on a mission to shop much to the girls delight! We first went to a government shop which sold every type of souvenier you could want but at a fixed price. After that and another juice it was into the souks proper and Bob really got into the bartering. Laden down with shopping we came back to the camp for a few hours relaxation. 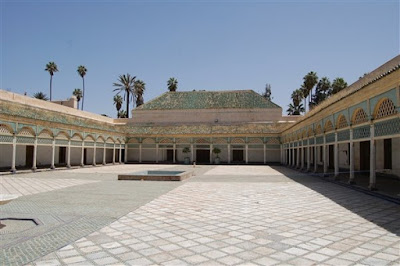 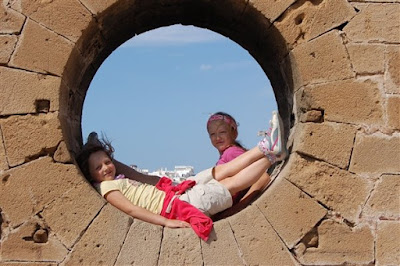 From Marrakech we moved on to our final destination of the organised tour, the port of Essaouria on the Atlantic coast. The town has a very European feel to it – lots of whitewashed 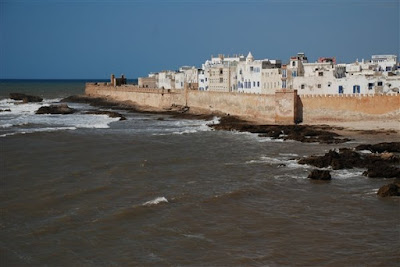 buildings. We walked into the port where boats are still made by hand and many fisherman still fish from small wooden boats all painted blue. 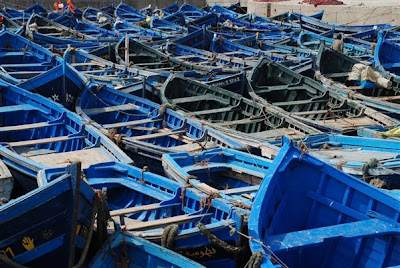 There are grills on the front where you can choose the fish you want to eat (everything from baby squid to a whole shark) and it will be cooked there in front of you. We bought some fish (no idea what it was but it looked good!) and took it back to the campsite to barbecue where we were joined by some others in the group who had decided to do the same. June also managed to find a small shop selling linen clothes which had a tailor on site to do alterations on the spot – needless to say there will be lots of linen in her wardrobe this summer! 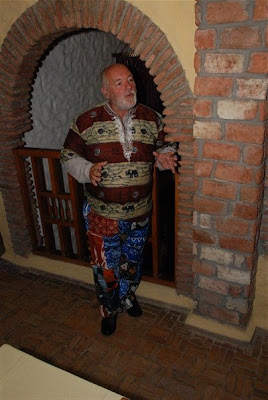 For our second and last night Ray had organized another dinner. This was at the Hotel Riad al Medina which had been used by Jimi Hendrix amongst others during the 1960s. It was a good night although a little sad as we were all heading in different directions the next morning, although Ray’s choice of clothing for later in the evening gave us all something to smile about!

We decided not to head straight back to Spain and along with 3 other vans, we took a more leisurely drive along the coast to El-Jadida via some roads that were… a little off the beaten track, shall we say! But despite the detour and Andy’s speeding fine, we got there in the end and spent the evening sitting around the vans eating and drinking. Having read the guidebook, perhaps we should have actually gone into the town as the old Portuguese city is a World Heritage Site. 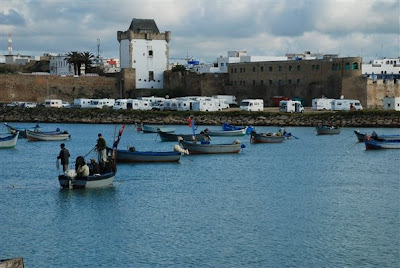 And then there were 3! Delaying the border crossing by another day we then headed to Asilah which would definitely be our final stop in Morocco as we had to be back to Calais for a crossing at 9am on 3rd May. There were no campsites here but motorhomes are allowed to park in the car park next to the walls of the old medina after a small payment to the guardien of the car park. This was another pretty village with lots of whitewashed buildings and blue shutters. One last shop before dinner where we were competing with the Chelsea vs Barcelona game for the attention of the staff! 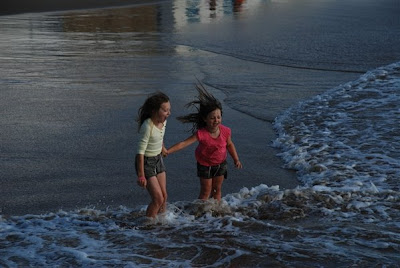 The next morning we all headed off for the border and exiting Morocco was definitely far easier than getting in! We all got back into the Spanish territory of Cueta without any hiccups and made a ferry that gave us a couple of hours driving time in Spain. The journey when back in Europe was pretty uneventful and that’s despite June taking her first turn at the wheel! Our stops on the way back were at an aire in Archdona near Granada, another in Aranda de Duero, and in France near Niort and finally Cite Europe in Calais (we avoided the aire this time!).